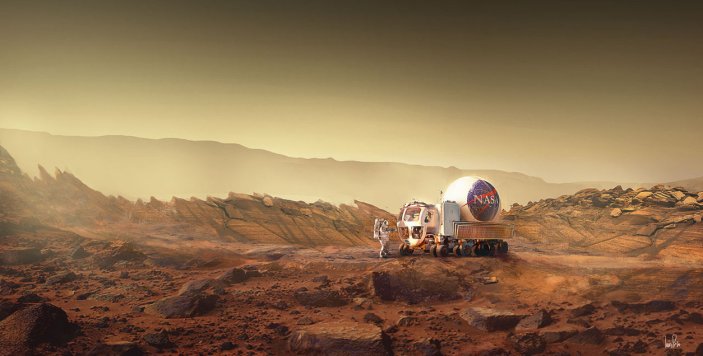 Since the movie just came out, I thought I’d add my review to the mix of ones out there. Is it worth the hype?

In a word: absolutely.

This isn’t really my typical pick when it comes to books. My boyfriend read it and loved it, and since I often press books on him that I loved, it’s only fair that I let him do the same.

The summary, from Goodreads:

Six days ago, astronaut Mark Watney became one of the first people to walk on Mars. Now, he’s sure he’ll be the first person to die there. After a dust storm nearly kills him & forces his crew to evacuate while thinking him dead, Mark finds himself stranded & completely alone with no way to even signal Earth that he’s alive—& even if he could get word out, his supplies would be gone long before a rescue could arrive. Chances are, though, he won’t have time to starve to death. The damaged machinery, unforgiving environment or plain-old “human error” are much more likely to kill him first. But Mark isn’t ready to give up yet. Drawing on his ingenuity, his engineering skills—& a relentless, dogged refusal to quit—he steadfastly confronts one seemingly insurmountable obstacle after the next. Will his resourcefulness be enough to overcome the impossible odds against him?

So. Interesting premise, but this wouldn’t necessarily have dragged me in.

Then I started reading:

Six days into what should be the greatest two months of my life, and it’s turned into a nightmare.

I don’t even know who’ll read this. I guess someone will find it eventually. Maybe a hundred years from now.

For the record… I didn’t die on Sol 6. Certainly the rest of the crew thought I did, and I can’t blame them. Maybe there’ll be a day of national mourning for me, and my Wikipedia page will say, “Mark Watney is the only human being to have died on Mars.”

And it’ll be right, probably. ‘Cause I’ll surely die here. Just not on Sol 6 when everyone thinks I did.

Let’s see…where do I begin?

So I loved it for one main reason: THE VOICE.

Mark Wattney is a delight to spend time with. The author absolutely nailed this guy’s personality, and it really came through in the writing. His gallows humor is just so engaging, it’s impossible to not want to keep reading.

Basically, this whole book is this guy trying to survive on Mars. The beginning was great, but I did wonder how Weir would manage to keep me engaged for an entire novel of one guy, alone, trying to grow enough potatoes to survive. But besides the voice, the entire process was just really interesting.

So this book did get a bit science- and math-y. I have to admit a decent chunk of it was a little over my head, and it would have been nice to have some of the stuff spelled out in layman’s terms (like it takes a little while to realize “Sol” means simply “day” on Mars). But it didn’t bore me or make me want to put the book down. (It did make me feel slightly inadequate–I don’t know how to make my own water out of hydrogen and oxygen!–but that’s why I’m a writer, not an astronaut.)

I saw some people complaining that the writing wasn’t especially impressive. There’s a reason I haven’t picked out my favorite quotes and put them in this review–it’s because I tend to pick out beautiful, poetic sentences, and this story was not comprised of those. But there’s a difference between a lack of poetry and bad writing. It was just written in a very straightforward way, and there’s nothing wrong with that. Also I am pretty ruthless when it comes to reading bad writing, and bad writing this ain’t.

This book was a 9/10 for me, and you should definitely read it before seeing the movie, which I daresay, actually looks pretty good.